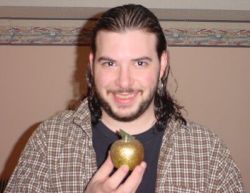 Professor Mu-Chao of the 23 Apples of Eris

Known until 2007 as Prince Mu-Chao, Professor Mu-Chao runs the 23 Apples of Eris and is one of the most well-known and respected of the newer Discordians. His 23ae website includes several Discordian works including different versions of Principia Discordia and the second edition of Apocrypha Discordia. It also features posts and commentaries by some of the most prominent 21st century Discordians, as well as postings by others. It is one of the most popular Discordian sites on the Internet.

According to the site, the 23 Apples of Eris broke off from the Randy Caboose Cabal in 1988. It was lead from 1988 to 1991 by a person known as Happy Fun Ball. In 1991, Professor Mu-Chao (then known as Prince Mu-Chao) became the leader. The group was also a part of the creation of Castle Chaos.

Perhaps his most significant achievement to Discordianism was a Jake or odd practical joke he proposed on the 23ae site on 11 August 2005 in a piece called 'The New Planet.' This was a tongue-in-cheek effort to get the planetary body then known as Planet X and nicknamed Xena to be named Planet Eris. This went well beyond a joke, for on 13 September 2006, the anniversary of the birth of Eristotle, the planet actually was named Eris by the International Astronomical Union. The Discordian campaign became known as 'The Jake that Changed a World.' (The planet's technical name is 136199 Eris. The union demoted planet Pluto, which is smaller than Eris, to a dwarf planet, and called Eris one as well).

He is credited in many Discordian works, and has work included in Apocrypha Discordia, Book of Eris, Ek-sen-trik-kuh Discordia: The Tales of Shamlicht, and many others.

Mu-Chao has a son, and as of September 2007 is looking for gainful employment.

Retrieved from "https://wiki.s23.org/w/index.php?title=Professor_Mu-Chao&oldid=39375"
Categories:
Cookies help us deliver our services. By using our services, you agree to our use of cookies.