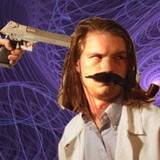 Professor Cramulus, also known as Pirate Dan, is one of the most prominent Discordians in the 21st century. He's worked on Black Iron Prison, was the first editor of the Discordian magazine Intermittens, and by creating and popularizing OMGASM or Operation Mindfuck: Golden Apple Seed Missions, he is perhaps the most successful of the modern-day Discordian pranksters.

One rumor claims the professor is a cybernetic organism created in the early 1980s by HIMEOBS Electronics in Orlando, Florida. Another says he is the creation of Flapjack Electronics, a secret division of the International House of Pancakes. Some versions of the story claim Pirate Dan was one of the animatronic robots featured in the Pirates of the Caribbean ride at Walt Disney World.

A more likely origin is that he was born in 1982 on the American East Coast, and declared himself a Discordian in 1998 at the age of 16. He attended high school in Connecticut, and graduated with a Bachelor's Degree in Psychology in New York.

He was first known in Discordian circles as Father Wise the Dan, then Pirate Dan, then Professor Cramulus, ASS.

His Discordian and related groups included a two-man group in high school, The Fairfield Cabal of the Angry Chicken; The JELLO Brothers of America, which had over 120 members; The OBNOXIOUS JERK CABAL, which was a group of people who lived or partied together: "we were all about pushing the envelope through obnoxious, over-the-top antics and absurdity." He was also involved with The Wrath of MS Paint Cabal (WOMP), "a sect of mystics who believe they can attain enlightenment through collage via MS Paint;" and The STFUPID cabal aka the Peedy Dotcom spags, who posted on principiadiscordia.com (which they inaccurately call PD.com).

He's been active with the 23 Apples of Eris at 23ae.com and with The Pirate Action League, and also claims to be the founder of The Adam Weishaupt Society, a claim that's been disputed.

Professor Cramulus' trademark is a large fake mustache (which changes from time to time), but his most important contribution to Discordianism is perhaps Golden Apple Seed Missions, or GASM, for which he is project leader/head cheerleader. The term comes from the "Golden Apple" that Eris labeled Kallisti, or "to the prettiest one," which led to the Trojan War, said by the ancient Greeks to be the first war. It also comes from the idea in Principia Discordia of planting your seeds in various places so they can spread. Combined with Operation Mindfuck or OM, began by the original Discordians, this becomes OMGASM.

Parts of OMGASM include Postergasm, posting weird or unexpected posters; EggGASM (also known as Erister Egg Hunt, the term Cramulus said he prefers), which is hiding odd items and saying in plastic Easter eggs; Book OM or BookGASM, placing Discordian books in churches, libraries and prisons; MileyGASM, which involves recognizing Miley Ray Cyrus and other pop stars as Discordian American Princesses; and ColbertGASM, which was an apparently successful attempt to get Jon Stewart and Stephen Colbert to publicly refer to their Illuminati connections. A continuing project is AbbyGASM, which involves writing to advice columnists about Discordia. New GASMs are created on an irregular basis.

Cramulus is also a moderator for the Black Iron Prison wiki, and edited, assembled, and released the second edition of the BIP booklet found at www.principiadiscordia.com/bip/1.php.

He said, "I consider myself a Discordian Activityist. That's activism, but without too much of a 'higher cause'. I think people should go out and start projects. Get out of your house and DO something. I believe that Discordians should help each other out, 'cause it's boring to stick apart. I'm all about Operation: Mindfuck... pranks, mischief, and culture jamming are my bread and butter."

As part of his working together concept, he and Triple Zero cofounded Discordian Cyberspace Masquerade. Some pieces from that event were chosen for the book Et Cetera Discordia. He spends time with memetics, in live action role playing, and "putting up zany posters on every flat surface in Yonkers."

He has his own website at http://www.cramul.us. It features Et Cetera Discordia, "Why I Put Up Posters," "Weirdness in the Strange Times," "101 Ways to Make Everyone's Day Weirder," and the tongue-in-cheek roleplaying game "The Legend of the Green Dragon."

Retrieved from "https://wiki.s23.org/w/index.php?title=Professor_Cramulus&oldid=42933"
Categories:
Cookies help us deliver our services. By using our services, you agree to our use of cookies.