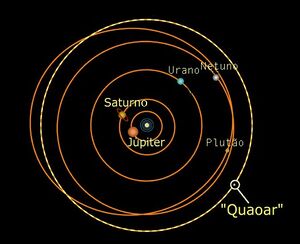 This is a Dwarf Planet candidate.

Other large dark objects already had been found orbiting the Sun along the far distant reaches at the edge of our Solar system.

In 2002, Michael Brown and Chadwick Trujillo of the Gemini Observatory in Hawaii found a large body and called it Quaoar. Its official scientific designation is 2002 LM60.

Quaoar discoverers Brown and Trujillo named the body they found after a creation god of the Native American Tongva tribe, the original inhabitants of the Los Angeles basin.

According to legend, Quaoar "came down from heaven; and, after reducing chaos to order, laid out the world on the back of seven giants. He then created the lower animals, and then mankind."

Quaoar and the other large planetoids dwell in the Kuiper Belt, an icy debris field of comet-like bodies extending billions of miles beyond the orbit of the distant planet Neptune.

After Quaoar was detected by a telescope on Earth as simply a dot of light, astronomers aimed the Hubble Space Telescope's powerful camera at it. Quaoar at that time became the farthest object in the Solar System ever to be resolved by a telescope.

Astronomers think Quaoar is composed mostly of ices mixed with rock, something like the makeup of a comet, although 100 million times greater in volume than an ordinary comet.

Even though Quaoar is smaller than Pluto, it is greater in volume than all the asteroids in the Solar system combined. On the other hand, Quaoar probably amounts to only about one-third the mass of the Asteroid Belt, because it's icy rather than rocky.

Retrieved from "https://wiki.s23.org/w/index.php?title=Quaoar&oldid=16137"
Categories:
Cookies help us deliver our services. By using our services, you agree to our use of cookies.