From s23
(Redirected from BSOD)
Jump to navigation Jump to search

This is the blue error screen you get when you try to do something that Windows doesn't like (like go to apple.com, or write angry emails about Bill Gates), or when some program conflicts with windows, or when you look at your windows computer the wrong way, or when you hiccup to close to a Windows NT machine. 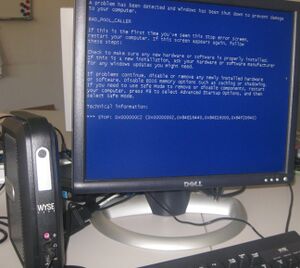 Rumor has it that for the next version of windows, the BSOD will be modified to be more exciting and catch people's attention. Instead of a plain text message saying something like

and so on, it will have a video of Bill Gates having butt sex with a computer (presumably yours) and will use state of the art voice synthesis technology to provide audio of Bill Gates reading your error code: "Stop! Oh! Oh! Oh! Oh! OHHH! OH! Seven! BEEEE!" as he messes all over your system.

The intent of the new BSOD is partially due to the Evil Empire's efforts to promote a fresh hip image, but also to better reflect the true nature of what's causing your system to suddenly blow.