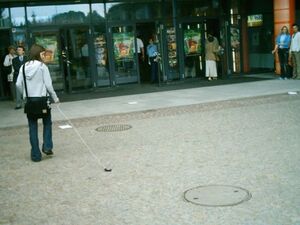 Floppy disks have three and a half inch and are pets.

"..We told our mobbers to bring floppies on the 1,5 meter strings, so they could 'walk' them like a dog. they enjoyed it even more then fitting discs into cracks and slits. about 30 people showed up with their floppies. Great fun.. lol. .."

A soft magnetic disk. It is called floppy because it flops if you wave it (at least, the 5¼-inch variety does)

Amstrad incorporated a 3-inch 180 KB single-sided disk drive into their CPC and PCW lines in the 80ies. These floppies cost about 8 DM each then and by the early 90ies were still available in two shops in Berlin. Peinlich was written on an Amstrad CP/M Computer and saved on six 3-inch-floppies.

Retrieved from "https://wiki.s23.org/w/index.php?title=FloppyDisks&oldid=18273"
Categories:
Cookies help us deliver our services. By using our services, you agree to our use of cookies.