All mentions of Principia Discordia and its various 'editions' in this article refer to the different versions of the fourth edition unless it says otherwise. 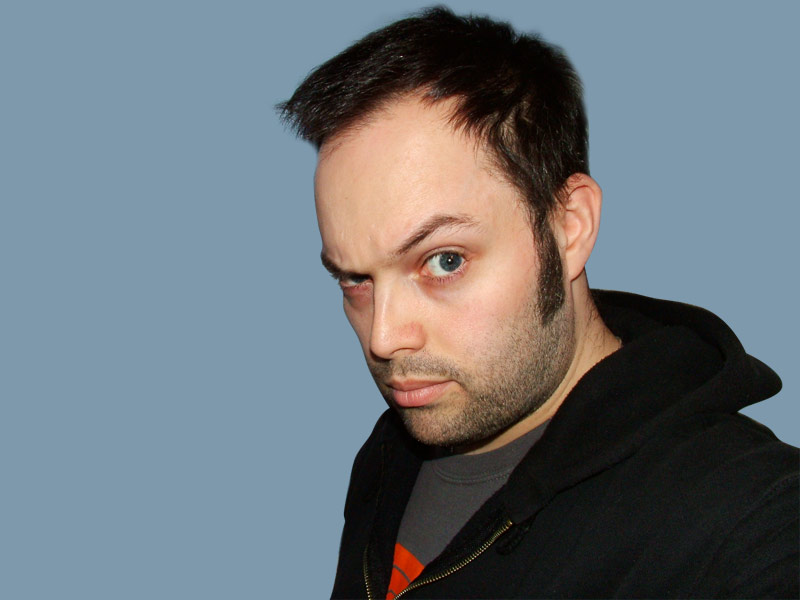 Rev. St. Syn, KSC, has been called "The Patron Saint of Discordian Publishing." He founded the POEE | UK Resource Centre, and the group's Synaptyclypse Generator has published several Discordian works, including Apocrypha Discordia, Book of Eris, and a hardcover edition of Principia Discordia.

One account relates that St. Syn, a member of the species Homo mutantes, didn't discover Discordianism until the year 3170 YOLD (2004). But, being a traveler from Dimension ZOMFG5LOLPINEAL23, he came to our Earth and retroactively became a Discordian several years earlier.

Or he may have been born as Aaron in the mid 1970s in Fife, which is the name of both a Scottish peninsula and a small flute with six to eight holes. He is married and the father of two children and an adopted cat. While he attended college, he considers himself self-taught, and is also self-employed. He claims to have "a healthy scepticism of just about everything from government to the occult."

His interests led him to Discordianism. "I've always been into wierdery, freakery and general nonsense relating to the occult, sf, fantasy, urban legends, cryptozoology." After discovering Principia Discordia online, he got a printed copy, and started a small collection of various editions of the book. He never consciously decided to become a Discordian; it just happened to fit.

While a rumor claims "St. Syn" is an ironic reference to being the "Saint of Sin," St. Syn has a different story. When signing up for his first email account in about 1996, he looked for a "cool nickname." He recalled a party he had attended the week before, where they consumed "herb" and homemade brew. During the morning-after hangovers, one person said, "Whoops, there goes a synapse." This inspired the online name of Synaptyx. After his discovery of Discordia, his online name became the Discordian Reverend Saint Synaptyx, KSC, which was condensed to become the current Rev. St. Syn, KSC.

He was "stabbinated repeatedly over many threads" at principiadiscordia.com until "they got bored." He then founded a sister site on "the other side of the pond" called POEE | UK Resource Centre. (POEE is the initials of one of the oldest Discordian cabals, one that's mentioned frequently in Principia Discordia.) The site includes a POEEcast (podcast) section, chat room, t-shirt shops and the POEE forum.

After Rev. St. Syn, KSC saw Apocrypha Discordia and Book of Eris online, he "stole" both books to make some money to keep his website running. (the books are both kopyleft). He was concerned that Rev. DrJon Swabey, who compiled the Apocrypha, would be upset, and sent DrJon a copy of his own book. But DrJon was pleased, and St. Syn plans to send a copy of the Eris book to its compiler Monsegnor Sebastian Verthaine, also known as St. Verthaine the Goth.

Synaptyclypse Generator has published several books through either Cafe' Press or Lulu.com, which are self-publishing companies. One of these is his own collection, Metaclysmia Discordia. These books and their authors/editors/compliers are:

S.G. also put together a hardbound edition of Principia Discordia, which was first printed in 2007. The P.D. is traditionally printed in soft cover, largely because it's cheaper. St. Syn put the book together while working for a local company that had very little work for him to do.

The publishing effort was inspired when Loompanics, the alternative press that produced the first mass printed version (the yellow cover version) of Principia Discordia, announced it was going out of business. While the most-sold version is Steve Jackson Games' black cover edition, Syn was concerned that the book would once again become hard to find, at least in a printed version. Many online versions meddled with the original; some do not include the graphics; and many that do have the original illustrations have reduced them to low-quality images.

Another motivation was the introduction of a new version of Principia that was retitled Discordia: Hail Eris Goddess of Chaos and Confusion. Revised by Beverly A. Potter, the much longer version has a different layout and different graphics, making it over twice as long as the original fourth edition. While the Principia has always been kopyleft, the revised version is copyrighted. Syn was upset at the changes and the copyrighting.

Traditionally, each edition of the Principia has a unique cover. At St. Syn's request, Matt Sadler made a new version of the Sacred Chao for the hardcover "red" or "snake" edition. Syn then saved a scanned copy of the Principia and saved it in pdf format. He added some new material, prophetically including Erister Eggs (this is months before Erister Egg Hunt was even invented). This then went to Diggory Press, a print-on-demand publisher located in the United Kingdom.

As a father, St. Syn has his own ideas on being a parent.

"I feel being given the freedom to find your own way (within reason) is very, very important for children and I intend to raise mine that way. That doesn't mean I'm going to let them stay up all night, smoke hash and raid the drinks cabinet at 10 years old. It means educating them in the things school doesn't teach; life stuff. The state won't introduce good life education policies in schools, I have to do that at home; a lot of parents seem to forget that these days."

Retrieved from "https://wiki.s23.org/w/index.php?title=Rev._St._Syn,_KSC&oldid=43024"
Categories:
Cookies help us deliver our services. By using our services, you agree to our use of cookies.