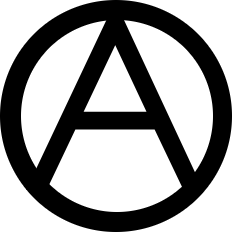 The circled-A is even more famous than the Black and Red-and-Black flags as an anarchist symbol (probably because it lends itself so well to graffiti). According to Peter Marshall the "circled-A" represents Proudhon's maxim "Anarchy is Order." [Demanding the Impossible p. 558] Peter Peterson also adds that the circle is "a symbol of unity and determination" which "lends support to the off-proclaimed idea of international anarchist solidarity." ["Flag, Torch, and Fist: The Symbols of Anarchism", Freedom, vol. 48, No. 11, pp. 8]

However, the origin of the "circled-A" as an anarchist symbol is less clear. Many think that it started in the 1970s punk movement, but it goes back to a much earlier period. According to Peter Marshall, "[i]n 1964 a French group, Jeunesse Libertaire, gave new impetus to Proudhon's slogan 'Anarchy is Order' by creating the circled-A a symbol which quickly proliferated throughout the world." [Op. Cit., p. 445] This is not the earliest sighting of this symbol. On November 25 1956, at its foundation in Brussels, the Alliance Ouvriere Anarchiste (AOA) adopted this symbol. Going even further, a BBC documentary on the Spanish Civil War shows an anarchist militia member with a "circled-A" clearly on the back of his helmet. Other than this, there is little know about the "circled-A"s origin.

Today the circled-A is one of the most successful images in the whole field of political symbolising. Its "incredible simplicity and directness led [it] to become the accepted symbol of the restrengthened anarchist movement after the revolt of 1968" particularly as in many, if not most, of the world's languages the word for anarchy begins with the letter A. [Peter Peterson, Op. Cit., p. 8]

Retrieved from "https://wiki.s23.org/w/index.php?title=Circled_A&oldid=22149"
Category:
Cookies help us deliver our services. By using our services, you agree to our use of cookies.